I’ve received my  copies of the French translation of The Good Son – Un Bon Garçon. To celebrate having my first translated book in my hands I’m…

…linking to a sample of Un Bon Garçon online

…giving away one of these precious copies of Un Bon Garçon – just add a amount below or share online – I have eyes everywhere!

…and, below, for fun, a short section from The Good Son were Mickey meets his first French man and shows his extensive knowledge of the French language. He’s just arrived at his school which has been taken over by a ‘summer scheme’ for kids during the holidays. Bigfoot is the community leader sorting out what the kids are doing that day.

‘There’s only room for ten in the minibus. Stand over by the main doors and Pierre will choose who can go,’ says Bigfoot.

I have to go on this trip. I can find out where he’s from and run away to his house if it’s really bad in St. Gabriel’s.

We’re all crowded round Pierre. ‘Me!’ Everyone bounces up and down, arms in the air. No girls at all.

He laughs. ‘You speak French?’

‘Bibliotheque!’ I shout. It means library. I remember it because I imagined Jesus jivin’ at the disco.

Some of the boys hate me, but they’re just dead jealous. Pierre taps me on the head. He picked me! Nobody ever picks me for nothin’.

‘And what eeze your name?’ Pierre asks me.

He laughs. I love him so much. We’re best friends already. He’s the coolest teacher I’ve ever had. 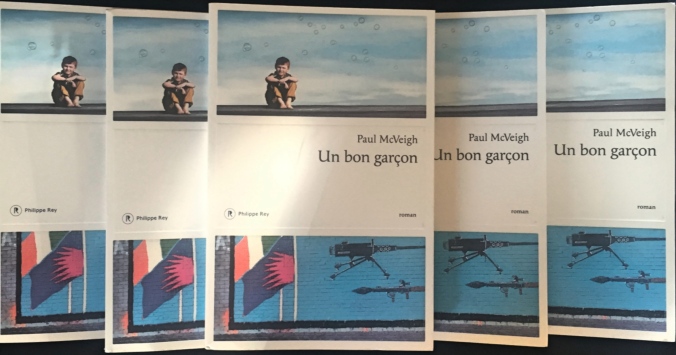 16 thoughts on “Win a Copy of Un Bon Garçon”