I’m involved in three events this year. I’m chairing events with Carlo Gebler, Alannah Hopkin, Alan McMonagle and Billy O’Callaghan. I love this festival and this will be my fourth year in a row! This year I had the honour of judging the Seán Ó Faoláin Short Story Competition and I will giving the prize to the winner at a special ceremony on Friday.

I hope to see some of you there. 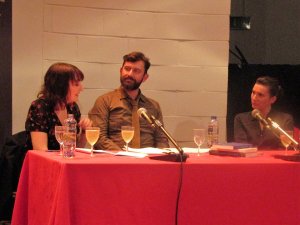 Last year at CSSF with Sinead Gleeson and Claire-Louise Bennet

Alannah Hopkin is a novelist, travel writer and critic from Kinsale, Co Cork. She has published two novels (Hamish Hamilton, London); other books include West Cork, the People & the Place (The Collins Press, Cork). Her stories have appeared in the London Magazine and The Cork Literary Review. The Dogs of Inishere (Dalkey Archive Press) is her first story collection.

Carlo Gébler was born Dublin in 1954, the eldest son of writer parents, Ernest Gébler and Edna O’Brien. His recent publications from New Island are The Projectionist: The Story of Ernest Gébler, The Wing Orderly’s Tales, and The Innocent of Falkland Road. He teaches at Trinity and is a member of Aosdána.

2. The Seán Ó Faoláin Prizegiving With a reading by the 2017 winner and prize presentation by judge Paul McVeigh.

Louise Nealon is a twenty-six year old writer from Co. Kildare. She studied English literature in Trinity College Dublin, and then completed a Masters in Creative Writing at Queen’s University Belfast in 2016. She currently lives on her family’s farm where she divides her time between reading, writing and milking cows. She will be reading her prizewinning story, ‘What Feminism Is’, at this event.

The Sean O’Faolain Prize is awarded to the best single story entered in competition from anywhere in the world. The first prize is €2000. The winner also receives a week’s residency at the Anam Cara artist retreat in West Cork and publication of their winning story in Southword. The winner, if they choose to travel to Cork for this event, also receives accommodation with meals for the duration of the festival and entry into all events. This occasion is an opportunity to hear the winning story and the judge’s citation from Paul McVeigh. The competition is now closed, and the winning and shortlisted stories have been announced on our competitions page.

Alan McMonagle has written for radio and published two collections of short stories, Liar Liar (Wordsonthestreet, 2008) and Psychotic Episodes (Arlen House, 2013), both of which were nominated for the Frank O’Connor Award. In November 2015, he signed a two-book deal with Picador, and in March 2017, Ithaca, his debut novel was published and immediately nominated for the Desmond Elliott Award for first novels. He lives in Galway.

Billy O’Callaghan, from Cork, is the author of three short story collections: In Exile (2008) and In Too Deep (2009), both published by Mercier Press, and The Things We Lose, the Things We Leave Behind (2013), published by New Island Books, which won the 2013 Bord Gais Energy Irish Book Award for Short Story of the Year, and which has been selected as Cork’s ‘One City, One Book’ for 2017. His first novel, The Dead House, was published by O’Brien Press/Brandon Books in May 2017. A novella, A Death in the Family, will be published in late 2017 as a Ploughshares Solo.