Some exciting news. The Good Son has been chosen by The Irish Times as their Book Club choice for next month, July. During the month there will essays & reviews by authors & my UK and foreign publishers, and interviews with me. It will culminate with a live event in Dublin at The Irish Writers’ Centre where I’ll be interviewed by Martin Doyle, assistant literary editor of The Irish Times on July 19 at The Irish Writers’ Centre.

What have you got to look forward to?

The original, 17 yr old, short story The Good Son is based on.

Maybe even a lost chapter never before published…

It’s going to be a wonderful month. 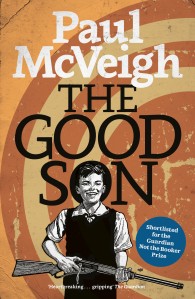 Currently finalist for The People’s Book Prize & longlisted for The Polari Prize
Chosen as Brighton’s City Reads 2016
Shortlisted: The Guardian’s ‘Not The Booker’ Prize
Shortlisted: The Authors’ Club Best First Novel Award
ELLE Magazine Best Books of 2015
The Irish Independent Top Reads of 2015
One of The Reading Agency Staff Picks Best of 2015
Wales Arts Review – Fiction of the Year
Number 1 Beach Read The Pool
A Gransnet Best Christmas Read for 2015
Savidge Reads and Pam Reader Blogs Books of the Year