Carrying the song & story of Irish writing all over the world

Excited to be heading to Dublin on Wednesday for the launch of FIRST LINES: JOHN MINIHAN’S PORTRAITS. Here’s what The Irish Times had to say…

“While Irish literature punches well above its weight, beyond the Anglophone world, its reach has been greatly enhanced by the work of Literature Ireland, a not-for-profit organisation funded by Culture Ireland and the Arts Council and led by Sinéad Mac Aodha. Since its foundation in 1995 Literature Ireland has funded the translation of more than 2,000 works of Irish literature into 56 world languages. Like most arts organisations, Literature Ireland’s funding suffered badly during the downturn. The value of the grants it awards has halved over the past eight years, and it has to turn down seven out of eight translation grant applications.

To celebrate the work of the latest wave of authors who are being published in translation across the globe with its support, Literature Ireland will next week launch First Lines, a promotional series of postcard-sized portraits by acclaimed photographer John Minihan, best known for his portraits of Samuel Beckett. Beckett was one of those rare writers capable of translating his own work. A BBC radio producer notoriously rejected his translation into English of En Attendant Godot as too full of Irishisms. Asked once if he was English, Beckett famously replied, “Au contraire”.” 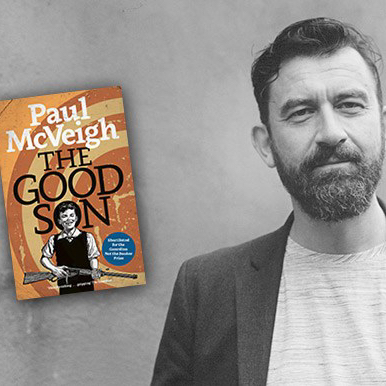 Winner of The Polari Prize & The McCrea Literary Award
“I devoured it in a day, but I’ve thought about it for many, many more. ”
Bailey’s Prize-winner Lisa McInerney
“A triumph of storytelling. An absolute gem.”
Donal Ryan

I’ll be heading to Dublin on Friday September 26 for the launch of First Lines: Irish Author Portraits by John Minihan.

John Minihan is the legendary photographer known for his wonderful portraits of Beckett in Paris. John has been taking portraits of Irish authors which have been made into postcards with the first lines from their work on the other side. I’m honoured to part of it and to celebrate the work of Literature Ireland.

I saw John last weekend where he is the resident photographer at Cork Short Story Festival and am looking forward to seeing him again at this event.

Literature Ireland have been hugely supportive of me, helping to fund translations of my The Good Son into French, German, Hungarian and Russian. A crucial organisation for the translation and promotion of Irish writers abroad.

One of the portraits by John Minihan

Winner of The Polari Prize & The McCrea Literary Award
“I devoured it in a day, but I’ve thought about it for many, many more. ”
Bailey’s Prize-winner Lisa McInerney
“A triumph of storytelling. An absolute gem.”
Donal Ryan
Paul's Public Facebook Page